Historically M&A activity has been viewed as a leading indicator for the overall economy – but times are changing.

Much is written this time of year on the metrics surrounding last year’s M&A activity. Rather than simply reiterate this publicly-available data, I thought it would be more impactful to examine some of the data relative to what we are currently seeing in the market with our clients at Alvarez & Marsal (A&M) in order to try and assess what we can expect in the year ahead for global M&A.

As the world’s largest turnaround and restructuring firm with a market-leading global M&A practice, A&M literally sits at the crossroads of both the ’good‘ and ’bad‘ economy. The correlation between these businesses gives us some unique insights into global M&A markets. My role as the Global Practice Leader of A&M’s Global Transaction Advisory Group provides me first-hand knowledge of the factors driving M&A around the world through my ’boots on the ground‘ visits with clients and teams across the U.S., Europe, the Middle East, India, Asia and Latin America. Additionally, our global practice has worked on several thousand transactions, with over 500 different clients, during 2019 alone. These clients include not only alternative investment firms (e.g. private equity, sovereign wealth, family office, etc.) but also corporate and strategic acquirers as well.

There is no arguing that by any measure the U.S. economy in 2019 had a very strong year. Tax reform, deregulation, corporate earnings, consumer spending, low interest rates and inflation along with record low unemployment have been some of the major drivers propelling the U.S. public equity markets to record levels. Contributing to this positivity has been the removal of some uncertainty with both the soon-to-be-signed Phase I China Trade Deal along with the recent vote on Brexit. While other slowing economies have had varying degrees of performance over the last year, the U.S. led the markets in 2019.

With this backdrop, one would think you would see a booming M&A market as well. By historical standards this is generally true as 2019 was a strong year for M&A indeed. According to Dealogic data and as reported in The Deal, “2019 U.S. deal value for deals of $100 million or more is one of the highest dollar value in at least the last five years.”  However, if you dig deeper, although it certainly didn’t feel like it at A&M, global M&A volume was actually down in 2019 as compared to 2018.

I believe looking at M&A volume vs. value is a better indicator of activity as value can be skewed based on a few large deals. Per Dealogic data, as of December 19, 2019 the number of announced global transactions in 2019 fell approximately 4.2% to 34,482, down from 35,976 in 2018. Furthermore, as reported in The Deal, “U.S. deal volume in the fourth quarter of 2019 was the lowest in at least the last five years,” and “private equity activity also slowed in the second half of the year, which has seen deal volume 20% below the quarterly average over the last five years with volume off 28%.” 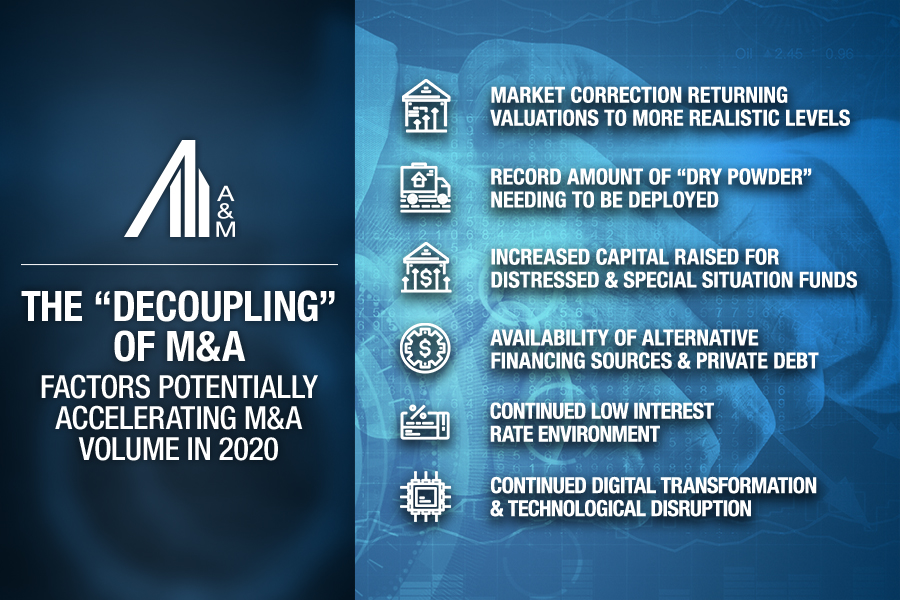 So why is M&A volume decelerating? In speaking with our clients, two factors are consistently mentioned no matter where in the world they are transacting. These are high valuations and competition for deals. This scenario is further evidenced by the fact that in certain geographies, such as the U.S., M&A value is actually up while volume is down resulting from investors paying high acquisition multiples that are being driven by competition for deals. As the alternative investment class continues to provide outsized returns, additional capital has flooded into the space, further increasing competition and driving up valuations. Low interest rates, ready access to capital and the growth of largely unregulated alternative financing sources all add fuel to the fire.

With the U.S. public equity markets currently near record highs and M&A volume trending downward, wouldn’t this suggest we are near a market peak potentially dragging down stock prices and M&A activity? I’m not sure that’s the case going into 2020.

As far as the public equity markets go, unlike many others, I am generally bearish particularly when it comes to U.S. stock prices and the global economy in general. While there are several positive factors, which may continue to propel the markets in the short term, in my opinion there are many more risk factors that could provide headwinds. In fact, over my 25+ year career I have never seen so many concurrent factors that could impact both the global economy and M&A activity as exist today. For the last several years, I have been referring to these factors as the “vortex of volatility.” Others, such as Bloomberg, have called it the “wall of worry.”

Call it what you will, but 2020 macro-factors such as the continued trade dispute with China, the details around Brexit, and recent geopolitical eruptions in Iran, not to mention ongoing situations with North Korea, and Russia, could all play a role in derailing the global economy. In addition, Fitch ratings has recently announced that “U.S. leveraged finance faces higher default rates and mounting downgrade pressure in 2020.” Fitch attributes this largely to “years of robust loan demand resulting from sponsored transactions with highly leveraged capital structures at inception that often rely on aggressive EBITDA assumptions.”

Additional factors are starting to come to light as well, including but not limited to:

All the above-mentioned factors lead me to think there will be a pullback in equity market valuations and a slowdown in the global economy. However, I do believe, after a potential six to 12 months pause, while buyers and sellers adjust to the “new normal,” M&A activity could actually increase in a potentially recessionary environment. Here’s why: 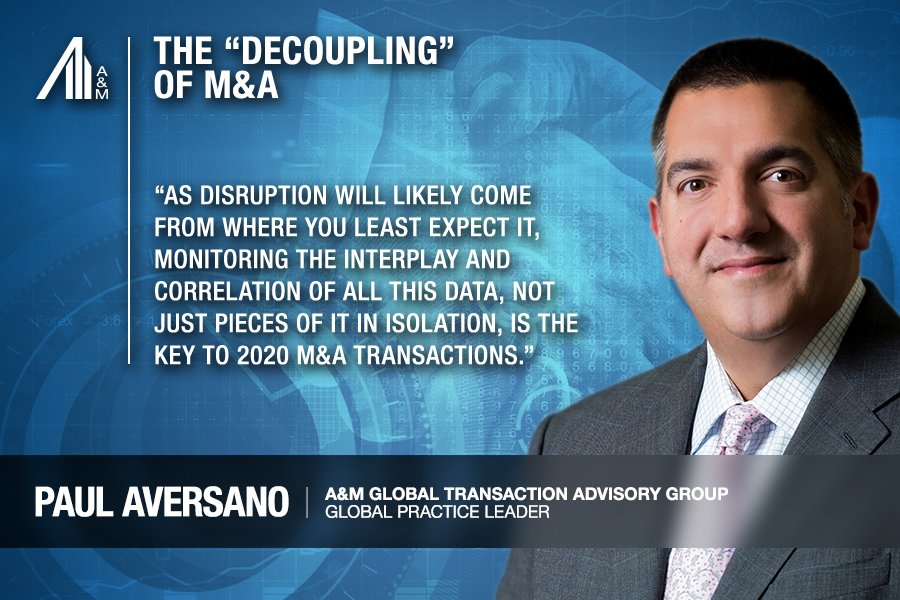 As a result, there appears to be a “decoupling” of M&A from the broader economy, now more than ever, as we head into 2020. Time will tell whether this proves to be the case. Those who participate in M&A transactions should keep close tabs on these factors along with an eye towards seizing potential opportunities when they present themselves in a fast-moving market environment. As disruption will likely come from where you least expect it, monitoring the interplay and correlation of all this data, not just pieces of it in isolation, is the key to 2020 M&A transactions.

The M&A Advisor recently released the 3rd Chapter of their book, Best Practices of the Best Dealmakers 2015. I was one of the few people in the M&A industry to share my experiences on Cross-Border dealmaking in 2015.. [Read More]